11/26/2013 – This article comes from the Chicago Tribune edition page 2, dated 11/04/1906. All I can say is wow, this person is REALLY keen on trying to explain this. Unfortunately, the only thing I got out of it is that people only wear clothes when they are alive to show off!! I am providing a transcription of the article in case the image is hard to read for some. We welcome comments!!

If you see a ghost in trailing bright draperies, be convinced that ‘tis a ghost of great degree. But if your specter visitations be clad in everyday breeches or petticoats theirs is the rank of commoner souls that not yet have ascended far up the heights of the other worlds.

Such is the philosophy of banshee fashions as understood by the ghost seers of psychic research.

While ghosts seem to trouble common folk less of late than of yore, they are giving the wiseacres a deal to think about and explain. Sir William Crookes has essayed to photograph such congenial shades as would pose before his camera. And he has succeeded to such degree that the most distrustful of unbelievers is provided now with visible evidence of living wraiths, and Prof. Elmer Gates does not despair of photographing the soul and already has won results that give the incredulous to believe occult phenomena something more than a pastime for perturbed imaginations.

It seems that these good spooks appear to mortal vision all bedight in mundane attire – perhaps the latest freaks from France, perhaps, Athenian trains and girdles, but still earthly. Why? What are the ghost clothes made of? And why do the ghosts dress at all?

All Ghosts Once Were Men and Women

Mark Fiske, an Englishman argues that ghosts once were men and women. Death may be considered as the portal which leads to a change of state, a change from visible existence to a condition of invisible existence. It does not necessarily mean a change of character or ideas, and it is reasonable to infer that a man in the new state of invisibility grows slowly, as in visible life, to an accommodation to his new surroundings, and that no sudden change takes place in his real personality. So it is logical to assume that the man dead is to all intent the same as the man alive, and consequently would be actuated by corresponding motives and would act in a corresponding manner.

Why do men wear clothes? It would appear superficially as if men wore clothes merely to keep themselves warm, and though this undoubtedly is true in cold countries, yet even in countries where no clothes are needed for warmth they still are worn with infinite gradations of color and form. It seems clear, therefore, that men wear cloths principally for the purpose of manifesting ideas – an abstract idea of authority and a concrete idea of individuality.

The living men give an immense deal of trouble and ingenuity in order to have their ideas of clothes carried out in matter, but in the spirit world, in the etheric plane of being, on the astral plane where the invisible man lives, the matter is so subtle that it is highly probably that ideas are capable of immediate realization in form by an effort of will and the forms so manifested would dissolve as soon as the potent constructive will force was removed. A ghost clothes himself exactly in the same way as a man, by the exercise of thought and will, but his thought and will can be carried out immediately in the matter.

In the psychic world about us we see water, for example, in a state of continual flux, varying from the solid form of ice through the fluid form of water into that of invisible elastic vapors. All material things are subject to like changes and consequently are passing from the visible to the invisible condition, and vice versa. So that the world, solid as it appears, is but a series of condensed atmospheres. It follows that the atmospheres contain all the properties and qualities of the solid earth. And there are, besides, emanations, invisible and continuous, from every fabric and every composition, passing from the visible to the invisible, so that in the most refined etheric atmosphere there is material enough for every variety of ghostly clothing to be produced at will in the subtle stuffs of the finer world.

Clothes such as the ghost wore in life are an immense aid to identification. The body itself is but the raiment of the soul; it may be that the spirits that haunt us are those that in life were absorbed in material interests and still long for the fleshly garment they have discarded. Persons of highly developed natures seldom seem to reappear; they do not remain long on the astral plane, and while on it their thoughts are turned to the future rather than to the past.

Still, ghosts do not always appear in the raiment of this life; some prefer loose, flowing robes. One famous seeress, the Seeress of Prevorst, said these were the spirits of the better order; doubtless farther removed from earthly memories. In the apparitions which have been recorded of eminent saints they always came in luminous draperies.

Some ghosts wear symbolic clothes. Where persons meet with violent or accidental death they sometimes appear as ghosts simultaneously or immediately after in the dress dripping with water, to show that they were drowned, or else blood stained, revealing a gory death. In these instances the ghosts probably may wish to convey the news of their death and the manner of their death.

Man Has Many Bodies

It is helpful in explaining things ghostly, spirit clothes to boot, to understand the hypothesis of mans’ various bodies, as postulated by occult science. The dense physical body is familiar to all. The etheric double, its counterpart, is formed of the four ether substances which science is discovering. The astral body interpenetrating this is composed of still finer matter and is the vehicle of emotional and desire life. The mental body is the vehicle of thought and is built up of still subtler materials. When the physical body is struck by death the man lives on the ethereal or astral plane for a time before he leaves that to enter a still higher plane.

“Ghosts” can be seen on any of these planes, for their subtle materials interpenetrate the grosser physical plane particles just as peas can interpenetrate the interstices left between apples or potatoes. The lower the plane the more earthlike are the specters. Hence it is rightly observed that the advanced spirits are clad differently from the fashions to which we are accustomed, whereas the less advanced spirits look much as they formerly looked during earth life. 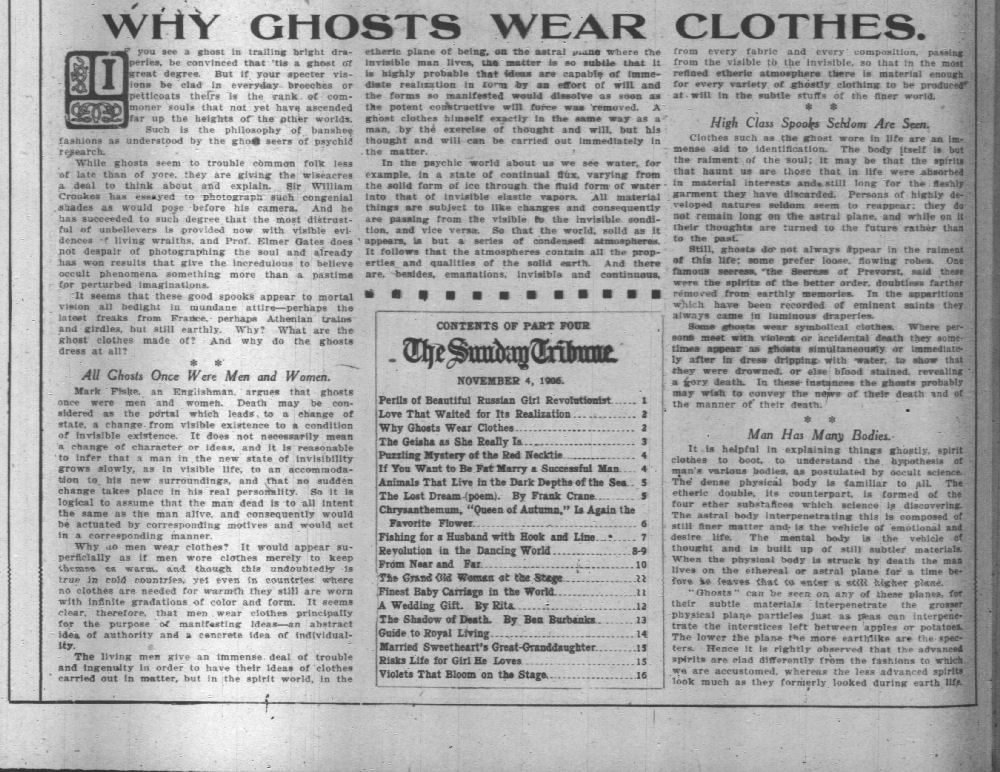